“In Gratitude to Funvini……..for taking and welcoming me, a street child, and beginning the process of sowing values, responsibility and many other good qualities in me to prepare me for life. For the marvellous work of the Educators who made me a citizen and a Bachiller, and gave me the hope of a professional career. I want to record a thousand thanks.”

Those words were written by a teenager from the streets of Medellín. They were inscribed on a little plaque that he gave to Funvini on the occasion of his receiving his Bachillerato; his High School Certificate. He was one of 8 young people who graduated as Bachillers at a special ceremony on Saturday, December 19th 2015 and at which I was privileged to be present. These 8 teenagers all came from the streets of the city and had been enabled to study and gain their qualifications due to the support  of Funvini which had paid for their education and supplied much encouragement, and all the additional back-up needed at Casa Walsingham. Some of them had slept in the street at night, then gone to Casa Walsingham in the morning for breakfast, a shower, a change of clothes, homework and lunch, after which they had gone to school.  Eight might not seem a lot, and indeed Funvini has 500 more children who go to school, but many of them come from the shanty-towns. These 8 came from the street and were once considered to be ‘rubbish’; absolute no-hopers whom everyone else had given up as a bad job.  They were found by the charity’s Street Educators and, since  Funvini is  a charity of Last Resort, given a chance. Now they have the opportunity of a future , with the hope of a career and a family. In their name I say ‘Thank You’ to all you who make our work possible. 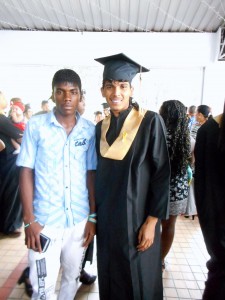 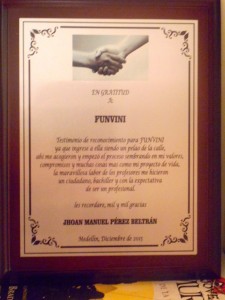