For the past few years one part of Funvini’s work has been centred on the people who have fled Venezuela because of its economic collapse and political persecution.
Of the thousands of refugees now living in the city of Medellin Funvini is only able to help about 200 of them but its support has been a lifeline to them, particularly during the pandemic when the charity’s food parcels have saved them from starvation.
These families all stand in need of Covid vaccinations, especially the children who are part of our programme at Casa Walsingham. Unvaccinated children have to observe social distancing, which means that we can only have 5 in a room, whereas vaccinated children do not have to observe social distancing, which means we can have more in each room. It is, therefore, crucial that as many as possible of these children should be vaccinated.
A factor that was complicating the vaccination of the Venezuelan children was their lack of identity documents. The Colombian government estimates that there may be up to 2,000,000 Venezuelan refugees in the country, many of whom crossed the border “irregularly”. It has therefore enacted a Temporary Protection Statue which will “regularise” the status of Venezuelans who were in Colombia by the end of January 2021, or who entered by the official routes during the next two years after that. The Statue is only “temporary”: it is due to be in force for 10 years, during which its beneficiaries will be able to remain in Colombia legally. We are not sure what is meant to happen to them after that.
Another problem is  that lack of identity documents is preventing Funvini from getting accident insurance for the Venezuelan children if and when they are taken  on outings; and it was also threatening to prevent them from obtaining school places next year. Fr Peter has therefore decided that, in the remainder of this year, the charity should do everything  it can to explain to our Venezuelan parents what the benefits of registration under the Statute are, what the consequences of non-registration are likely to be, and what they need to do in order to register.  He says, “And to facilitate the information campaign and the process of registration, I arranged for us to take on an extra social-worker on a three-month contract.”
On December 2nd a Registration Day was held at Casa Walsingham when, as Fr Peter says, ” We teamed up with officials from the government’s “Make Yourself Visible” campaign to organise a Registration Day at Casa Walsingham. This was a great success, and by the end of the day 40 Venezuelan children and 123 of their family members had been registered. We are planning to hold another registration day after Christmas, and possibly yet another one in January. Of course, these numbers are just a drop in the ocean: but for the children and families concerned they are very important. It is another example of the way in which even a little charity like ours can have a real impact on children’s lives.”
REGISTRATION DAY AT CASA WALSINGHAM 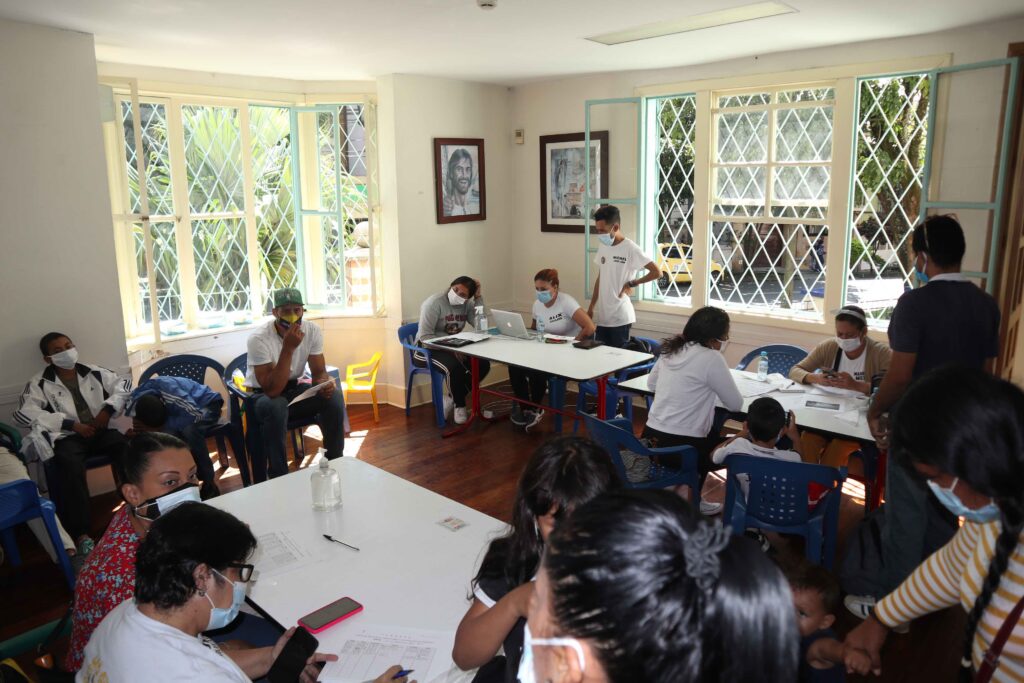